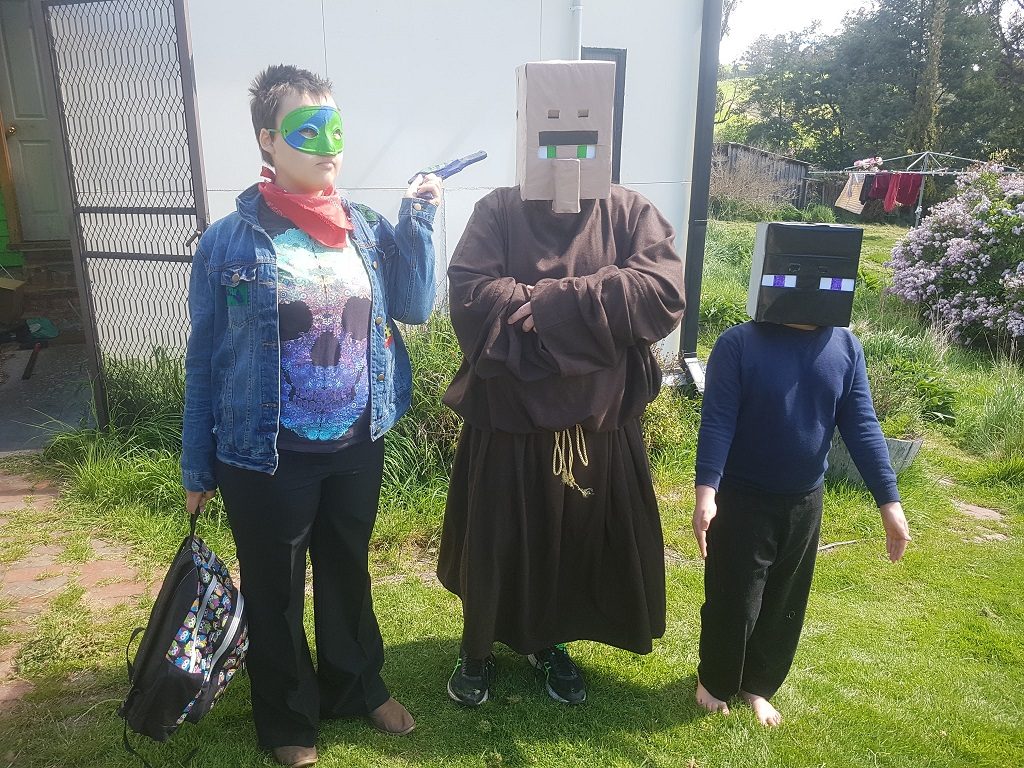 Halloween is an American holiday that very few people in Australia see any reason to celebrate.

Right up until you have kids.

Once you have kids, Halloween is an excuse to dress up and go for a walk. Exercise is good. Play is good.  Imaginative play with a certain amount of showing off is good. Social interaction is good. Sugar is, if not actually good, certainly pleasant.  It’s OK to have an occasional treat, right?

And so we need a way to lessen the two main problems with Halloween in Australia, which are these:

So enter Project Orange. The plan goes like this:

We want to encourage children of the area to come “trick or treating” around the neighbourhood (minus the tricks, thank you), but only to houses that will welcome them.  Houses that consider Halloween an undesirable alien invasion should be completely undisturbed.

To ensure this, we mark the welcoming houses with orange streamers.  (In previous years, we used orange balloons, but the streamers are kinder to the environment, don’t trigger latex allergies and are much cheaper.)

If you want to see the cute costumes, and maybe send your own kids out as part of the celebration, hang up some orange streamers at the front of your house.  On your letterbox is good.  Then lay on some lollies for the visiting munchkins.  If all else fails and nobody shows up, you’ve got some sugar to console you!

If you would prefer not to have anything to do with it, just throw the streamers away (or save them for your own crafty projects) and ignore the whole mess. 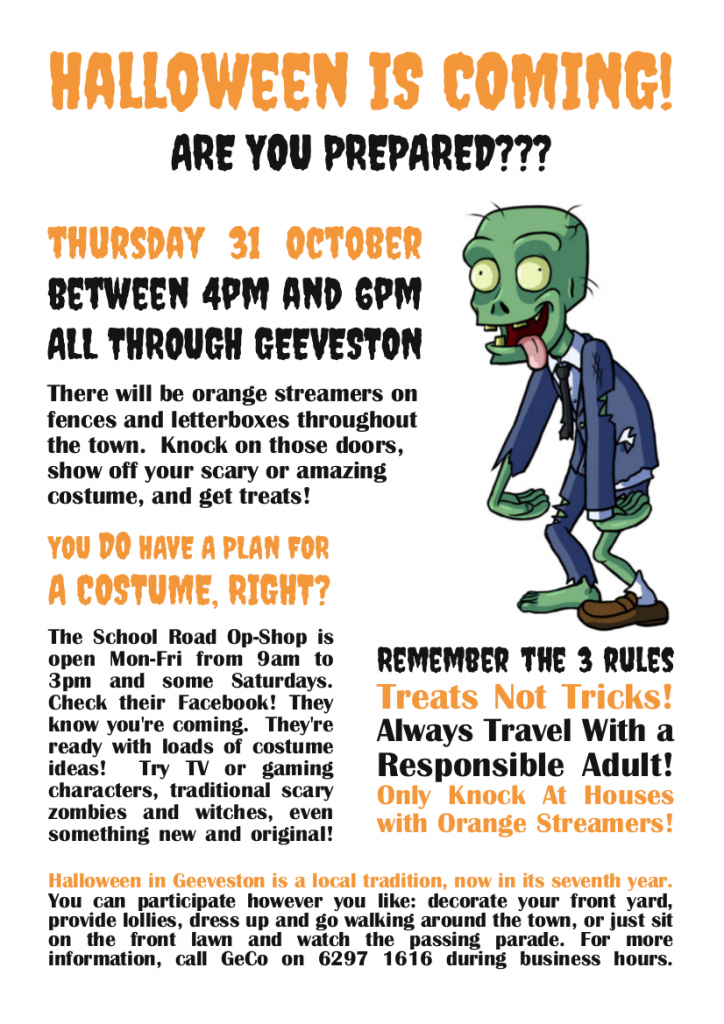 Kids who want to go trick-or-treating must do so only at houses with orange streamers; doing so at any other house is a definite no-no.

If you run out of lollies, you can always take your streamers down.

This takes some organisation.  You need someone to print up explanatory leaflets and include orange streamers, and then deliver them to every house in your area — a suburb, a distinct bunch of streets, a village.  This takes a few hours on a Saturday afternoon, but it’s not impossible.

You also need to put up posters.  See the sample here.  Note the three rules:

We started doing this in Canberra in 2009.  It worked brilliantly. Our next door neighbour, whose newborn grand-daughter was visiting, had been dreading the doorbell rings and knocks all evening.  With Project Orange in place, all they had to do was not put up an orange balloon (as it was in those days) and they were left in peace all night.  I took my kids around the street, dressed in their Halloween finery, and they got lots of lollies and impressed lots of people with their costumes.  We had maybe forty or fifty visitors just from our street of a hundred-odd houses, and every one of them agreed the plan was brilliant.

Four years later in 2013, in the town of Geeveston, Tasmania, where we now live, we tried this plan again.  Friends have been doing it successfully back in Canberra and elsewhere, so we thought we’d give it another go.

So how did it go?  Another success.  Two hundred houses received balloons and letters, and nearly forty of them decided to put balloons out and lay on the lollies.  Well over sixty kids and their parents joined in, helped and encouraged by the Geeveston Community Centre and the shopkeepers of the town.  It worked, again!

In 2014 we were away for Halloween, but the Geeveston Community Centre continued the tradition, and it was a success again.  It’s now a recognised and highly anticipated part of the local calendar.

Halloween 2019 was our seventh year. By the middle of winter, people were already asking me about it.  It seems to have hit the spot for people in this sleepy but randomly eccentric town, and I think the principle is generally applicable anywhere. 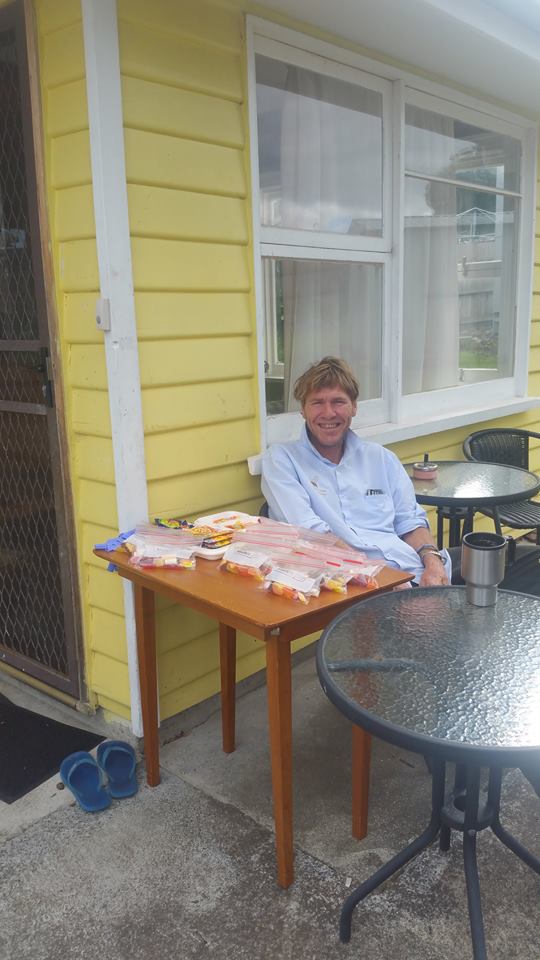 A lot of people dislike the idea of Halloween in Australia.  They say it’s an American cultural import, and they don’t want any part of it.  That’s nonsense, of course: Halloween celebrations began in Britain quite a long time ago, and while the American trick-or-treat, candy corn, late-Autumn night time celebration has its own flavour, the Australian version is a lot different. Project Orange usually happens in the afternoon and early evening, well before sunset, and while there are treats there are definitely no tricks!   As with everything from football to pavlova, we do things our own way.

There’s always a bit of worry about kids wandering the streets and knocking on doors.  That’s why Project Orange says Always Travel With A Responsible Adult.  To be frank, “stranger danger” is a furphy: the risk to children in our culture is from members of their extended family, or else authority figures like priests.  Strangers, on average, are less dangerous.  Which may mean the responsible adult they travel with is more of a risk to them… but they’re out in public with lots of witnesses, so we have to hope that will help.

The problem of kids eating too much sugar on a weeknight is always worth mentioning.  Parents can quarantine their kids’ goody bags and dole them out over time if they wish, but honestly: because Project Orange happens after school and before dinner, a good meal with plenty of protein of something the kids love — we recommend spag bol, but it’s up to you! — will counter the effect of a little extra sugar.  And consider all the exercise they got in order to get the sugar in the first place!  From a health perspective, it’s still a win.

If this sounds like the sort of thing you’d enjoy doing in your local community, you can!  All you need is:

As a general rule, it’s good to have the help of a local community house or organisation to help with questions and provide people with a central location to muster, but the beauty of Project Orange is that it doesn’t need to be centralised.  That reduces the problem you see in some places of hordes of children and accompanying adults all descending upon a bunch of houses at once.  With this method, with about 200 houses and well over a hundred participants, the crowds are still quite sparse.

Why deliver flyers and streamers (or balloons) to every house? Why not put them somewhere like the local shop and let people take them?

Mainly because most people would miss that their own nose was on fire if they didn’t have an app on their phone to tell them.  At least if the flyer is in your letterbox, you’ll know it’s for you.

Isn’t it easier to just say “leave your porch light on to receive trick-or-treaters”?

Easier, but error prone.  Consider the reasons someone might have their light on that aren’t related to Halloween: they’re expecting a visitor, they hit the wrong switch, they have a sensor light that just goes on at random… whereas nobody is going to just accidentally put orange streamers on their letterbox.

We have a version where people who don’t want to be visited put up a sign. Isn’t that better?

A principle of system design is: make the common case simple and the exceptional case exceptional.  In Australia, most people still don’t “do” Halloween, so it makes sense not to bother them. If you make the active choice to be involved, you make the active choice to put up a sign (the orange streamers) to say so. It’s better system design in general.  Also, it reduces the chance that someone will complain about being bothered all evening just because they didn’t get the memo.

We tried this with black/blue/red balloons/streamers/stickers/signs. Why do you insist on orange?

Meh. You can use whatever you like. Orange is pretty universally recognised as a Halloweeny sort of colour, and it’s not easily mistaken for some other reason to put up decorations.  It’s pretty distinctive, in fact.  But there’s nothing about this that says you have to follow all the “rules”.  Mix and match and see if you can evolve an even better way… then tell us about it so we can steal your best ideas for next year!

Why don’t you have a precise schedule or directions for where to go? We did this in our town with a sort of parade/horde of kids…

I’ve seen that method. It has problems: the bigger kids get ahead and descend upon the lollies like sugar-addicted locusts, leaving nothing for the younger kids. Also, anyone who can’t make it right on time misses out.  The key point of Project Orange is that you can start anywhere at any time from the general start time, and you don’t have to follow a crowd.  This makes the entire experience a lot less stressful for everyone, kids and lolly-giving adults alike.

This wouldn’t work with a large number of houses, would it?

Depends on your definition. We did it the first year with the 100-odd houses around our street, Barnard Circuit in Florey, ACT.  From 2013, we’ve done it with about 200 houses in the main part of Geeveston, not counting the far-flung bits along the highway.  The most difficult bit is folding the streamers into the flyers, and delivering them — but Geeveston weather is nice in mid-October, and I don’t mind wearing out my sneakers for a bit of community fun.  My kids are old enough to help delivering now, too.

I have no idea if it would work for more than a couple of hundred houses.  Why not try it and let me know?

We’d like to do this, but we don’t know how to do the posters and flyers. Can you help?

Sure! Email me on bat@flurf.net and I’ll send you the files I use. You can adapt them to your area and give it a try.  Mid-October is the best time to deliver the flyers, and then you just let it happen!