WARNING: EYE PROTECTION IS STRONGLY RECOMMENDED AFTER THIS POINT

Many years ago, half a dozen SCA heralds got together and asked themselves a question: what can we invent that is simultaneously simple heraldry and yet utterly abominable.  (In fact, their goal was to produce an emblazon — a heraldic drawing — that was virtually impossible to blazon by sight, even by experienced heralds.  But “abominable” is as good a name for that as any.)  What they devised is a piece of heraldic artwork that became so famous, it was given a name.

Named heraldry is very rare.  You will know of the Union Jack, of course — a generally unblazonable melange of assorted crosses and saltires that (as of this writing) is currently the flag of the United Kingdom of Great Britain and Northern Ireland.  (People reading this in the future may need to consult a history book to discover what I’m talking about.)  Within the SCA, the first and most famous piece of Named Heraldry was called Six Bored Heralds.

Let’s build it from scratch, in hope to reveal its terrible majesty to an at-least-partially prepared mind.

Let me introduce you to the first two players in our little drama.  On the left we have a field filled with the tincture called vair.  Vair is a fur, supposedly representing the grey-blue back fur liberated from of a scurry of squirrels, neatly alternating with the white underbelly fur from the same unwilling donors.  It’s common enough in period heraldry, though less so in the SCA.  And on the right, a lozengy field, specifically lozengy gules and Or.  This is a little less common in period and SCA heraldry, but still quite unremarkable. 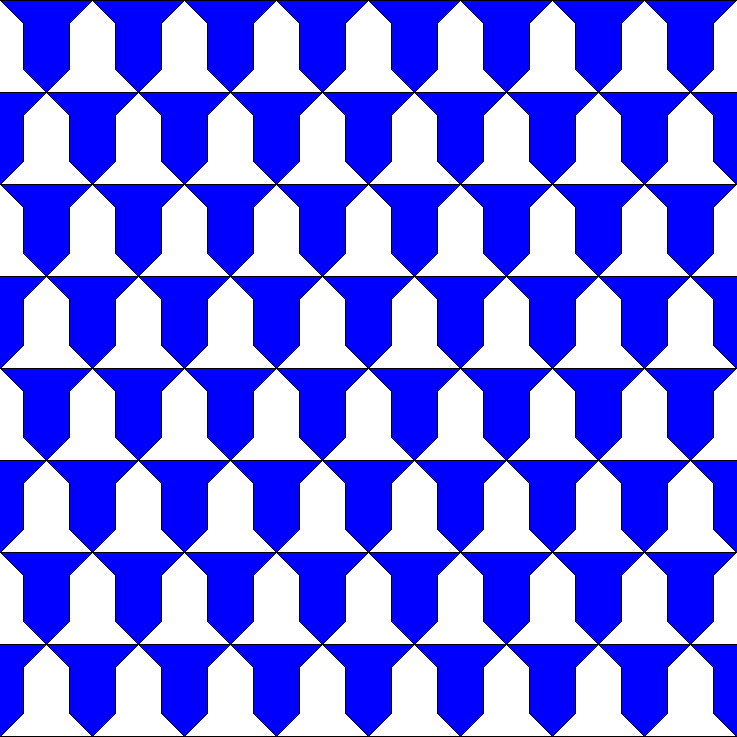 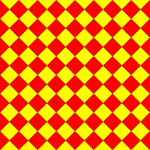 Now, it’s definitely simple but not especially abominable to have a device with a plain field and no charges or field divisions on it, so the six bored heralds were not finished here.  Instead, they turned their thoughts to charges.

A mascle is a lozenge, like the diamond shapes you see above, with a piece taken out of it — voided, in the parlance.  As a charge on a field, it might look like this: 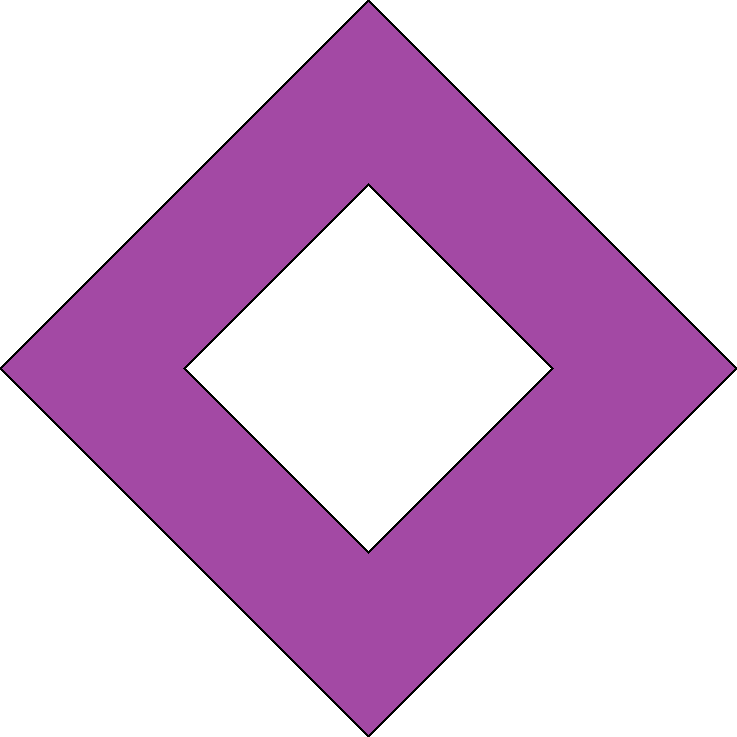 This would be Argent, a mascle purpure.  Nothing abominable yet!  But that’s just charges; I mentioned field divisions too.  What are they like?

This is a simple field of Gyronny vert and Or.  Quite attractive, especially if you like pizza.

But what if we combine the mascle and the gyronny field?  We might get something like this: 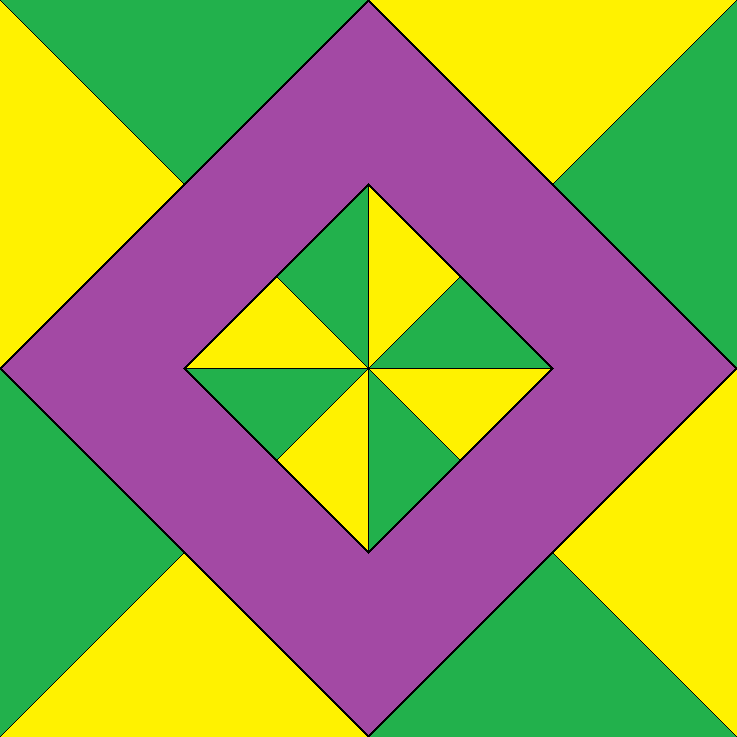 Sure, the colours are a bit garish, but it’s still quite simple: Gyronny vert and Or, a mascle purpure.

But the six bored heralds were not content to stop there.  Any herald, faced with that, would have no trouble reading off the blazon as if it were calligraphed there in Norman French.  “Abominable” requires more than that!

So consider what happens if the mascle, instead of being purpure, is counterchanged.  Counterchanging is the heraldic trick where the two tinctures of the field — there must be two for it to work, one colour and one metal — show through the charge as if it were some weird prism.  Here, as a demonstration, is the same device as above, but with the mascle counterchanged: 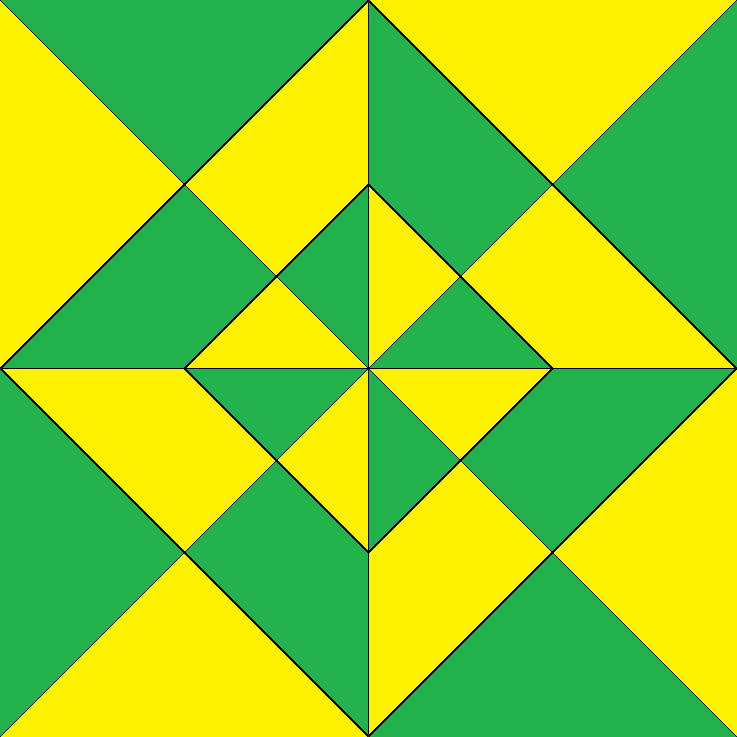 See how the green and yellow are swapped wherever the mascle touches? That’s counterchanging.

Well, thought the six bored heralds.  Now we have something!  What if, instead of vert and Or, we went back to our friends vair and lozengy, and squeezed them into place?  The result is very simple indeed: Gyronny vair and lozengy Or and gules, a mascle counterchanged; not much more complex than the garish but simple purple mascle just above.  But if you haven’t adjusted your goggles before now, please do so before scrolling down to witness… Six Bored Heralds. 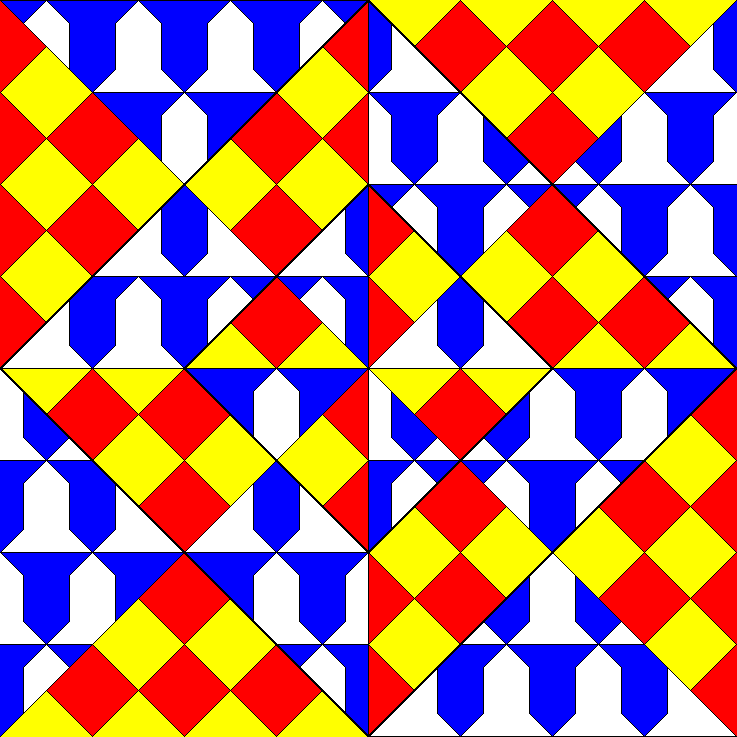 Abominable enough for you?

Some years later, I was filled with a desire to invent a blazon that rhymed.  No — better than that: I wanted it to be singable.  I rummaged through my Pictorial Dictionary and came up with this.  First, take a look at the emblazon for this particular piece of named heraldry: 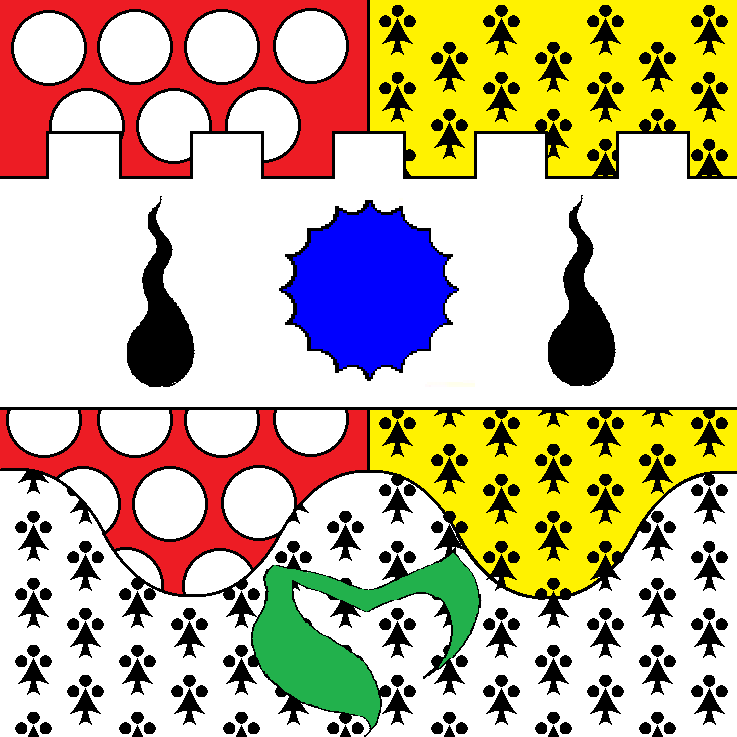 This is, of course, unregistrable.  With seven tinctures (gules, erminois, argent, ermine, sable, azure and vert) and six charges (a fess embattled, a base wavy, plates (roundels argent), a hurt (roundel azure) engrailed, a couple of gouttes de poix (sable) and a maunche), it has a complexity of 13 — not even a Politarchopolan knight could get away with that!  And there are probably recognisability issues with the engrailed roundel, though I note there have been others registered so you just never know.

However, none of that matters. What’s important is the blazon.  To the tune of Greensleeves, by H Tudor, sing with me:

Per pale gules platy and erminois
On a fess embattled argent a hurt
Engrailed between two gouttes de poix,
On a base wavy ermine a maunche vert.

Of course, the name of this particular creation is Greensleeves.

After that, my descent into insanity was unstoppable.  I present without any apology my ultimate creation.  It was created after I reasoned thus:

If an ermine fur can be composed of any two contrasting tinctures, as in the standard black ermine spots on white of ermine or the gold on black of pean, then there’s no surprise that we occasionally see such constructions as vert ermined Or or argent ermined purpure.

But, I reasoned, colours and metals are not the only tinctures!  Furs are tinctures too, including the various variants of ermine!  So why not?  Where is the law against it?  Let’s take this as far as it will go!  I present the ultimate: Counter-ermine ermined erminois, an ermine ermine.  Known forever after as… Ermine Gerd. 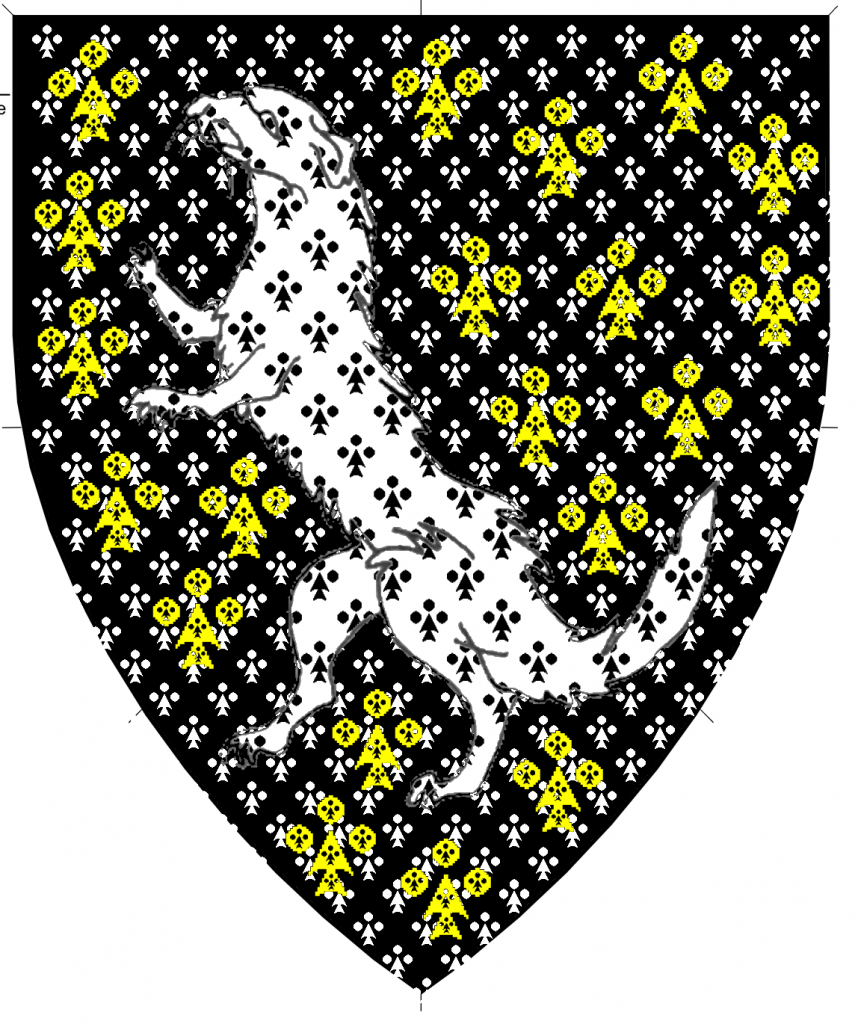